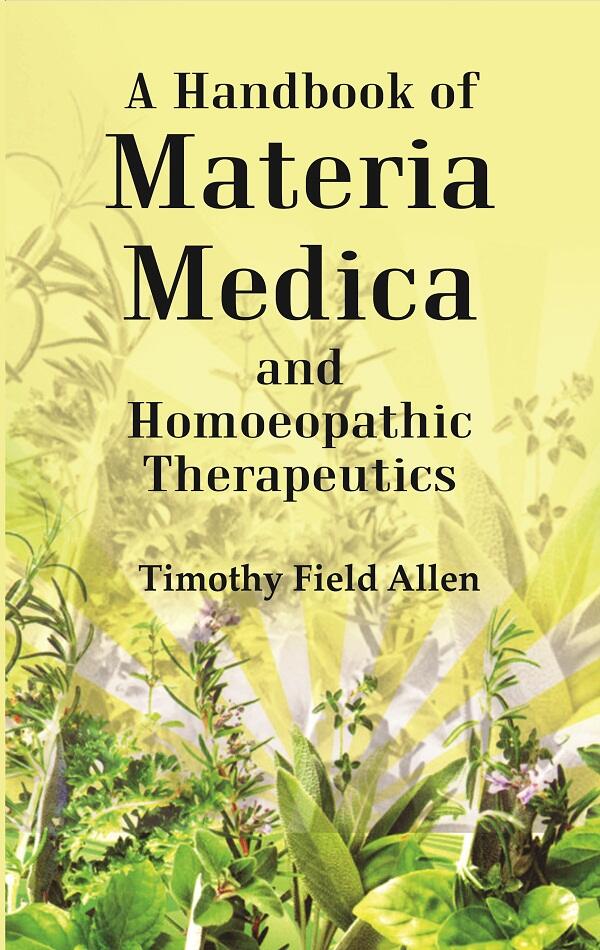 A Handbook Of Materia Medica And Homoeopathic Therapeutics

About The Book : This book is a step ahead of the "Encyclopedia of Homoeopathy" by T F Allen. Here the author attempts to correct and supply the omissions which were there in the Encyclopedia. This massive Materia Medica which is based on Hahnemann's schema of proving is a complete record of all proving. New cases of poisoning are an exclusive feature. In this book, a large amount of information is condensed and adjusted to very small space. Comparisons of each drug have been made with few of its allies. The concise clinical information given with the remedies is an added advantage which would be of interest to those who are keen on research and further studies. A practical working information on 'Selection of Remedy' is a beneficial section. This book will contribute to the application of homeopathic therapeutics in a much wider sense. About The Author : Timothy Field Allen (April 24, 1837 – December 5, 1902) was an American physician and botanist. Timothy Field Allen was born on April 24, 1837 in Westminster, Vermont. He graduated A. B. at Amherst College in 1858, and subsequently received the degree of A. M. from the same institution. He graduated M. D. in 1861 at the University of the City of New York and in the same year commenced practice at Brooklyn, N. Y. In 1862 he was an acting assistant surgeon in the United States Army, and in the following year established himself in New York City, which remained the field of his labors for nearly forty years. Becoming associated professionally with Dr. Carroll Dunham, he early adopted homeopathy, and soon rose to a prominent position among homeopathic practitioners. In 1865 he received the degree of M.D. from the Homeopathic (Hahnemann) Medical College, of Philadelphia; two years later he became professor of materia medica in the New York Homeopathic College, and from 1882 was its dean. For many years he was surgeon to the New York Ophthalmic Hospital, and was largely instrumental in the establishment of the Laura Franklin Free Hospital for Children and the Flower Hospital, in New York City. He was one of the editors of the New York Journal of Homeopathy, 1873–75, and later edited an Encyclopedia of Pure Materia Medica in ten volumes, 1875–79; he was also the author of A Handbook of Materia Medica and Homeopathic Therapeutics, published at Philadelphia in 1879. The Title 'A Handbook of Materia Medica and Homoeopathic Therapeutics written/authored/edited by Timothy Field Allen', published in the year 2023. The ISBN 9788121298650 is assigned to the Hardcover version of this title. This book has total of pp. 1177 (Pages). The publisher of this title is Gyan Publishing House. This Book is in English. The subject of this book is Alternative Medicine. Size of the book is 22.59 x 28.94 cms Vol:-