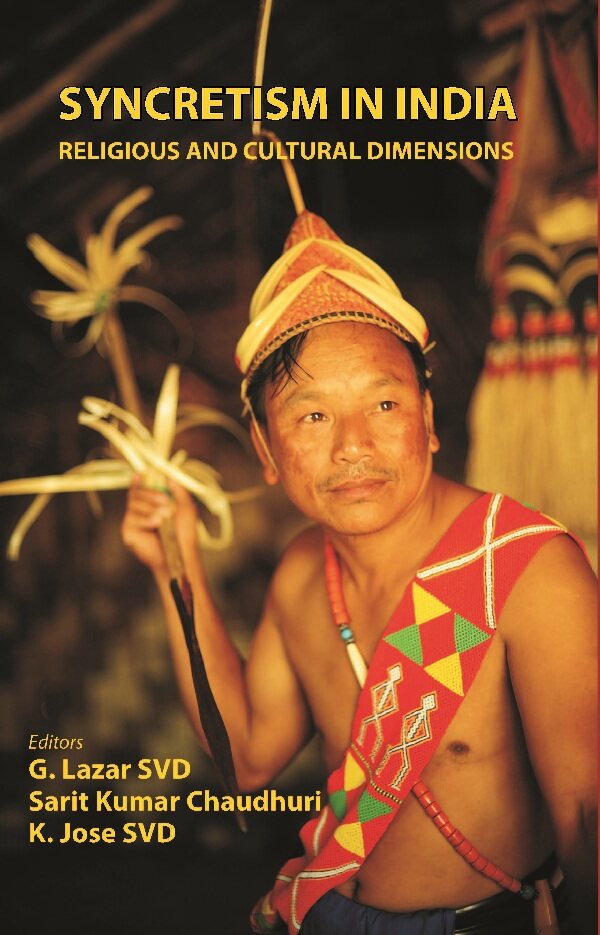 The Title 'Syncretism in India: Religious and Cultural Dimensions written/authored/edited by Editors:- G. Lazar SVD, Sarit K. Chaudhuri, K. Jose SVD', published in the year 2019. The ISBN 9788121214179 is assigned to the Hardcover version of this title. This book has total of pp. 354 (Pages). The publisher of this title is Gyan Publishing House (IGRMS). This Book is in English. The subject of this book is North East Studies. Size of the book is 14.34 x 22.59 cms POD

Present volume is the outcome of two days national seminar on SYNCRETISM IN INDIA: CULTURAL AND RELIGIOUS DIMENSIONS held at Guwahati in 2015 in which large number of social scientists across the disciplinary frames presented their papers linking with the issues and ideas concerning 'syncretism', a concept which has often been perceived in variegated ways by scholars of different disciplines. A number of articles could be found in this volume by anthropologists relating to syncretism that interprets the term as borrowing of cultural traits among two or more groups; more specifically, between Hindus and Muslims, or Hindus and Christian, or even between tribals and non-tribals, etc., based on empirical standpoints. However, one may like to ask, why this so happened in spite of the ever expanding knowledge base of the academic fraternity regarding this cultural phenomena. We can envisage that this volume brings in to focus multiple and contested realities of our time and also opens up space for further critical discourse revolved around the notion of 'syncretism' in a multi-cultural state like India.

GNANAPRAGASAM LAZAR, born on May 8, 1954 was a student of Prof. Dr. Stephen Fuchs an eminent Anthropologist of international fame. Lazar began studying anthropology from 1975 from the University of My sore and then in Pune. He has obtained his M.A., in Philosophy, in the University of Poona (1986), and he furthered his studies in World Religions at the University of Lancaster, England, where he obtained his degree of M.A., M.Phil., and then PhD (1994).Apart from his regular teaching, he has published four books and more than 32 scholarly articles in Anthropology, Sociology and World Religions. He is one of the fewest specialists in Islam and Shaiva Siddhanta philosophy. He is the Founder Director of SANSKRUTI – Institute of Dravidian Culture and Research, member of Anthropos International, Founder Associate Editor of Anthropos India. Currently he is also the President of Asia Pacific Missions Studies. Email: lazarsvd@gmail.com

Sarit Kumar Chaudhuri is a Professor of Anthropology who taught in Rajiv Gandhi University, Arunachal Pradesh for two decades and also worked in Anthropological Survey of India, Shillong for five years. He was a Post-Doctoral Fellow in SOAS, U.K. for two years; worked in collaborative projects with British Museum, and SOAS, U.K. for five years. He has published 65 papers and authored/edited 15 books largely focusing on tribal issues of North East India. Since 2014, he is working as the Director of IGRMS, Bhopal. Currently he is the member of 'Think Tank' constituted by the Ministry of Culture, Govt. of India and also member of various Academic bodies in various Universities of India.

K. Jose has master's degree in Theology and Sociology; M.Phil., in Sociology and a doctorate degree in North East India Studies. He is the Founder Director of SANSKRITI- NEICR, Guwahati; Member of Anthropos International, and Founder Managing Director of Anthropos India. He has the distinction of authoring and editing a number of books on North Eastern Culture and life-style. Jose is a scholar, social activist and a promoter of North Eastern Culture and Civilization. Email: kjosesvd@gmail.com

4. Syncretism among the Muslims of Darjeeling Himalaya . 47
— Rajib Chatterjee

6. Religious Syncretism among the Meiteis of Manipur . 61
— Naorem Naokhomba Singh

8. Anthropo-Historic Discussion on Syncretism in Language and Dressing Pattern among People of Central India. 83
— Neha Singh

11. Syncretism: Religious Dimensions among the Khasi of Meghalaya. 115
— D. Sun

13. Language Shift and Maintenance: A Process of Linguistic Syncretism among the War Khasi of Meghalaya . 127
— Supratim Bhattacharya & Pushpita Purkayastha

18. Syncretism in Religious and Cultural Dimension: A study of the Jaintias of Meghalaya . 181
— R.P. Athparia

21. An Empirical Study on the Syncretistic Values among the Indian Population . 235
— Anupma Bharadwaj

26. Indigenous Beliefs and Practices of the Deoris of Assam . 289
— Arifur Zaman

29. Looking into Indian Civilization through religious syncretism: A study on the process of blending religious belief of the Savar and Hinduism . 327
— Sampa Basu