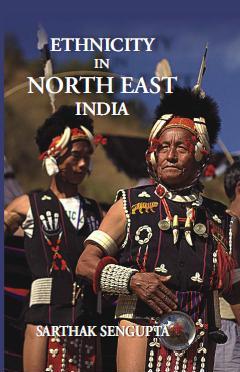 The Title 'Ethnicity in North East India written/authored/edited by Sarthak Sengupta', published in the year 2014. The ISBN 9788121212168 is assigned to the Hardcover version of this title. This book has total of pp. 183 (Pages). The publisher of this title is Gyan Publishing House. This Book is in English. The subject of this book is North-East Indian Studies. Size of the book is 14.34 x 22.59 cms

In the present-day world, the study of ethnicity has been a major concern of anthropology, and other branches of social sciences. Ethnicity is not a simple and isolable social observable fact, rather interconnected to many other multifaceted societal issues. Probing and understanding ethnicity requires numerous dimensions as it operates and channelise through various ways and means. Ethnicity in North East India is a collection of eleven original essays offered by renowned teachers and experienced researchers to acquaint wide readers about the dynamic nature of ethnicity in North East India to understand the mechanism according to which the character of its momentary commonality becomes clearly visible. The book will be interest to scholars, policy makers and policy analysts, and students of social sciences particularly those concerned with North East India

SARTHAK SENGUPTA (born 1955) received his M.Sc. (1977) and Ph.D. (1983) degrees in Anthropology from Dibrugarh University and Gauhati University respectively. He also worked with the Anthropological Survey of India, Government of India and North Eastern Hill University, Shillong for quite some time and conducted intensive field studies among diverse tribes and castes in Arunachal Pradesh, Assam, Meghalaya, Nagaland, and Uttar Pradesh. Professor Sengupta in all has about 210 research publications, singly and with his students and colleagues published in various reputed national and international professional journals besides several chapters in edited volumes. Moreover, he has to his own credit twelve well-knitted books on North East Indian tribes. Sengupta is associated with many Indian Universities in the matters of post-graduate education in Anthropology He is an active life and executive member of several professional anthropological bodies and members of the editorial boards of Journal of Human Ecology, New Delhi (1998-2003) and The Anthropologist, New Delhi (since 2009). He is also the Editor of the Bulletin of the Department of Anthropology, Dibrugarh University, Dibrugarh. Sengupta is at present Professor and Head, Department of Anthropology; and Director (i/c), Centre for North East Studies, Dibrugarh University, Assam. His current research interest are genetical demography, globin gene distribution, population genetics, bio-social studies, diet and nutrition, indigenous health practices among disadvantaged tribal population groups of North East India.

Preface 9 # Acknowledgements 13 # List of Tables 15 # List of Contributors 17 # 1. Ethnicity: Some Conceptual, Theoretical and Methodological Considerations 19 Sekh Rahim Mondal # 2. Ethnicity and Nation-building in India: A Critical Appreciation with Special Reference to North East India 31 S.K. Nanda # 3. Customary Laws and Tribal Identity in North Eastern India 59 Walter Fernandes # 4. Identity Construction Through Fission: The Case of the Desi, Paliya and Rajbansi Paliya of Southern North Bengal 78 Rajatsubhra Mukhopadhyay # 5. Socio-political Dimensions of Ethnic Movement in Assam 90 Girin Phukon # 6. Ethnicity and Identity Formation of the Mishings of Assam 97 Lohit Hazarika # 7. Aspiration for an Ethnic Identity—Evolved or Created? A Question Asked in the Context of Assam 112 Pranami Garg # 8. Genesis of the All India Gurkha League and its Impact on the Nepalese Identity Movement in Assam 121 Rudraman Thapa # 9. The Problem of Ethnicity: Some Observations with Reference to Manipur in North East India 139 Rajat Kanti Das # 10. Supra Tribalism: Search for a New Way in Manipur 147 M.C. Arun # 11. Ethnicity in Nagaland 158 # Lucy Zehol # Index 171